Select a category
Events All News 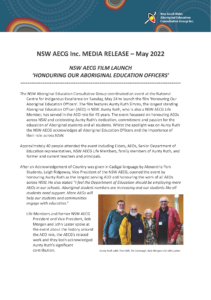 After an Acknowledgement of Country was given in Cadigal language by Alexandria Park Students, Leigh Ridgeway, Vice President of the NSW AECG, opened the event by honouring Aunty Ruth as the longest serving AEO and honouring the work of all AEOs across NSW. He also stated “I feel the Department of Education should be employing more AEOs in our schools. Aboriginal student numbers are increasing and our students like all students need support. More AEOs will help our students and communities engage with education.”

Life Members and former NSW AECG President and Vice President, Bob Morgan and John Lester spoke at the event about the history around the AEO role, the AECG’s related work and they both acknowledged Aunty Ruth’s significant contribution.

Catherine Trindall, President of the NSW AECG, said that “it’s wonderful that we’ve been able to recognise and honour Aunty Ruth Simms in this way. The NSW AECG will look forward to distributing the film to schools across the state and to support professionally developing school leadership and teachers so that they can work more effectively with their AEOs. We will also work towards increasing our advocacy efforts to the NSW Department of Education to better recognise and value the importance of the AEO role.”

Aunty Ruth Simms closed the event. “I’d like to thank the NSW AECG for    putting on this event and we really appreciate and thank everyone who made the journey to be here today…and I really appreciate Bob and John’s contribution and I would like to acknowledge all AEOs.”